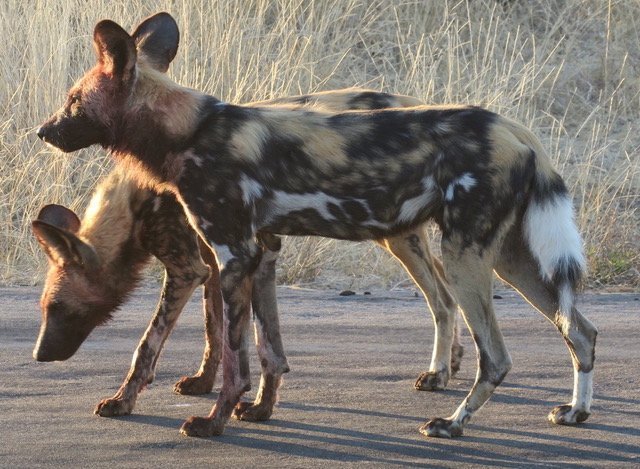 The Cape wild dog is one of the most threatened species in Southern Africa.There are approximately 500 of them in the Greater Kruger National Park and fortunately several “packs” include the Klaserie Private Nature Reserve as part of their territory which is usually quite large ~ 400 sq km.

These two,part of a larger pack, were seen in our area earlier this month.

Unfortunately lions dominate African wild dogs and as a result they are a major source of mortality for both adults and pups. Where there are many lions there are less wild dogs and vice versa………but fortunately for visitors to the Klaserie, we all have fairly extensive traversing areas and are privileged to be able to see both.

The Greater Kruger National park is a huge conservation area and despite this, the African wild dog’s fragmented small populations result in their existence being endangered as inbreeding avoidance by mate selection is characteristic of the species. Inbreeding is likely avoided because it leads to the expression of recessive deleterious alleles. Computer simulations indicate that all populations continuing to avoid incestuous mating will become extinct in the next century due to the unavailability of unrelated mates.

There are so many interesting facts about this species that can be found here.